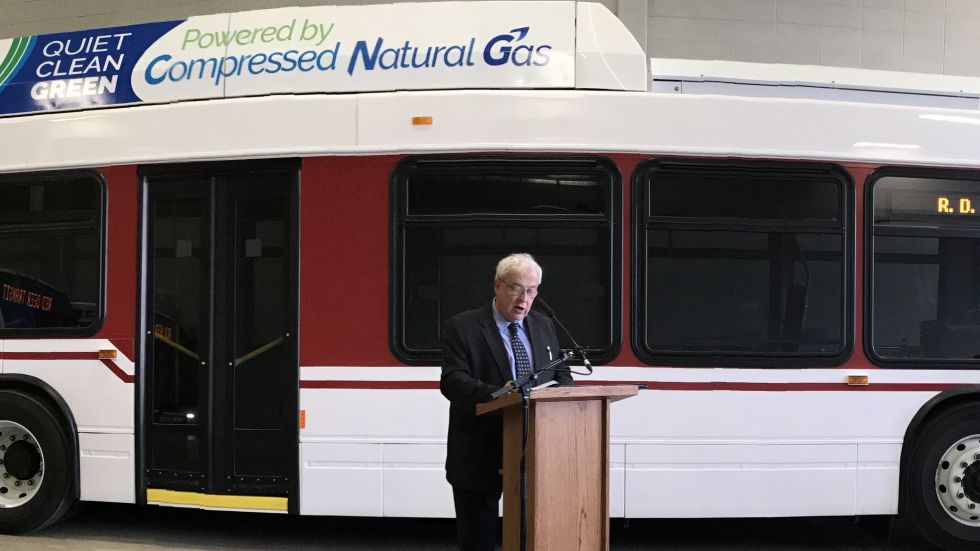 The city of Red Deer, Alberta has launched new Compressed Natural Gas (CNG) buses, joining the fleet of Red Deer Transit as a ‘greener’ way of providing service to its customers. The newly launches buses replace, on July 11, replaced 17 aging diesel buses.The city has committed to an ongoing replacement program to continue the transition to natural gas fuel.

The CNG Transit Bus project originated as part of the city’s Environmental Master Plan as a strategy to green the fleet, reducing greenhouse gas emissions from city fleet vehicles. After extensive environmental and economic analysis, Council agreed to move forward with compressed natural gas, as it could be integrated into other sub-fleets, increasing synergies and further reducing harmful emissions.

In the future, all diesel-fueled transit buses will be replaced with CNG buses as they reach the end of their lifespan, which typically lasts 18 years. Sixteen of the 17 new buses were purchased by the City of Red Deer using federal Gas Tax Fund and provincial Green Transit Incentives Program (GreenTRIP). One bus was paid for by Red Deer County. It will be used by Red Deer Transit for service to the County.

In addition to being more environmentally friendly, CNG buses run quieter and are more cost efficient than our current diesel-fueled buses. Trever Sparrow, Superintendent, Conventional Transit Services, is excited about the change to CNG. “We expect to see significant savings on fuel as the cost of CNG fuel is approximately 44% less than diesel and buses get 33% better mileage using CNG.  In addition, we expect the range on a CNG bus to be 900-1000 km versus 600-700 on a diesel bus,” he told NGV Global News.

The bus brand is Nova Bus, headquartered in Quebec and the buses were built in New York.

In addition to purchasing 17 new buses, there was a new CNG fueling site constructed at the City of Red Deer Civic Yards for the buses to be fueled. Infrastructure upgrades were also completed to the bus storage facility and civic garage. These included adding or improvements to gas detection monitoring, electrical, heating and air handling systems to accommodate the new CNG buses.

Is Maersk responsible for declining interest in scrubbers?
August 9, 2017

Stranded Gas to LNG in Argentina
August 8, 2017
Go to Top